I think about an entertainer I saw as a child who had a row of 5 foot tall dowel sticks and at the top of each dowel stick he would place a white dinner plate and spin it.  While a plate was spinning he would go to the next dowel and spin a plate on it and then the next and the next.  Eventually the first plate he began spinning would lose its spinning speed and start to wobble so he would have to go back to that first plate and start to spin it again, and then he would resume placing plates on the other dowels with the goal of getting a plate on each dowel like so: 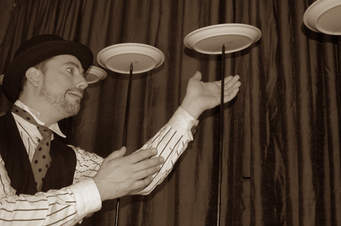 The entertainer had to pay attention to the spinning plates because if any lost too much spinning speed they were at risk of falling off the stick and smashing on the floor.

If I look at the areas I want to focus on right now, and if they were like spinning plates, there are only two spinning plates — decluttering and health.

Maybe I will add another plate like focusing on my finances but I don’t have that plate and stick yet.  I am only spinning health and decluttering at this time.  Already I noticed that my health plate is starting to wobble.  I have been eating junk and so the weight that I lost during my cleanse is starting to creep back on and I am starting to wobble.

This is a text widget, which allows you to add text or HTML to your sidebar. You can use them to display text, links, images, HTML, or a combination of these. Edit them in the Widget section of the Customizer.